3 Myths About Mounting TVs Over Fireplaces 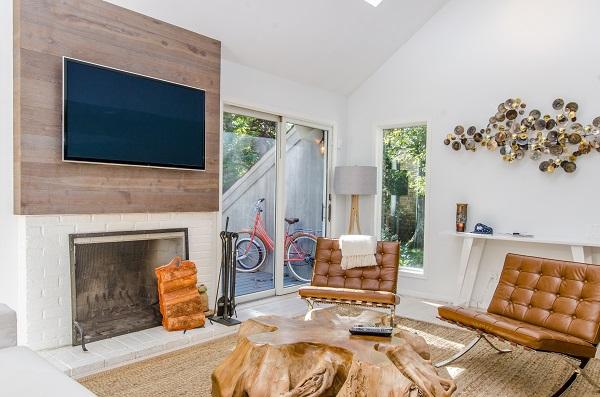 Neck strain, reduction in image quality, and heat problems are common objections integrators face from clients about mounting a TV over a fireplace. They are not true!

The dilemma of mounting a TV over a fireplace reminds me of a "Twilight Zone" episode in which a spaceship carrying highly intelligent beings lands on a distant planet where a group of colonists had crashed 30 years before. When one of the colonists breaks his wrist, the resident physician begins to apply a splint to the man’s arm.  But before he gets halfway through the process, one of the advanced visitors waves a wand and the man’s wrist is immediately healed.

The old doctor protests in earnest, claiming that the only way to heal a broken arm is the tried-and-true splint method. But, after examining the man’s arm, he had to admit: the wand had worked. There was no cogent argument he could make to claim otherwise.

There is a valuable lesson here: conventional wisdom – doing things the way you’ve always done them -- is fine, until something better comes along. And there is no better illustration of this adage than with TV mounts.

This is a critical point because placing a TV above a fireplace has always been – and remains – an extremely popular mounting option. So, once you understand the reasons that this can be done cost-effectively, efficiently, and safely, you’ll instantly become a more valuable resource to customers.

The reasons often cited against mounting over fireplaces are abundant, but they boil down to three main issues.

The myth here is that putting the TV above the fireplace puts the viewing angle above eye level. This requires the viewer to crane his or her neck to see the television, which can result in all kinds of health problems. According to the Prairie Spine Institute, “If the TV is…mounted too high, people tend to look up. This could potentially lead to muscular imbalances, and stiffness, particularly of the neck.”

No one can argue that putting the TV above the fireplace creates a horrible viewing angle. That’s why full-motion mounts – especially pulldown mounts with vertical movement capability – were developed. Full-motion mounts offer a variety of capabilities that enhance the TV-viewing experience.

The key words here are “full motion.” There are a number of mounts that offer tilt capability, as well as articulation. While both are useful, it is the vertical movement which allows the viewer to mount their TV above the fireplace, pull it down to eye level when they want to watch it, then easily move it back when they’re finished. No neck craning, no health problems, no doctor’s appointments.

This myth centers around how many video experts claim that in addition to the neck-craning problem, there is the quality of the picture to consider. If the viewer is not looking straight at the screen (as they likely would with a TV mounted above a fireplace), the result can be a washed-out image, as the viewer is only seeing a fraction of the light being produced by the TV. So, after paying what was likely a sizable chunk of cash for their new 65-inch, 4K Ultra-HD flat screen, they are not likely to want to make this kind of compromise.

With a modern, full-motion TV wall mount, picture quality is no longer a concern. Mounts with vertical capability allow the viewer to bring the TV down to eye level. Since they are now looking straight at the screen, the problem of washed-out picture quality is eliminated. Even for mounts without vertical movement, they can at least be tilted downward to minimize loss of resolution.

According to some electronics experts, having an open fire going while your TV is above the mantel can potentially damage sensitive electronic parts. There is actually considerable disagreement over this issue; even those who agree can’t necessarily agree on what temperature is considered too high and how long a TV must be exposed to it before damage occurs.

The fact is, as long as the TV is above the mantel, the mantel will act as a shield from the rising heat. However, the situation changes when you have a full-motion mount with vertical movement that allows the viewer to put the TV right out in front of the fire. Look for solutions that include heat alerts.